The Tibetan-Buddhist art objects of the Bodhimanda Foundation are the representation of a unique spiritual culture for which there is worldwide interest. The spiritual heritage of the Tibetans is rooted in wisdom and compassion. The Foundation first offers you a short explanation about Buddhism in Tibet. Then we will discuss the layout of the Tibetan temple, with as its central figure Kelsang Gyatso the seventh Dalai Lama, the symbol of the Wheel of the Law and Sacrifice of the stimuli of the five senses. Finally, we will address the fourteenth Dalai Lama, his visit to and consecration of the Tibet temple, and the extraordinary thangka he donated to the Bodhimanda Foundation. 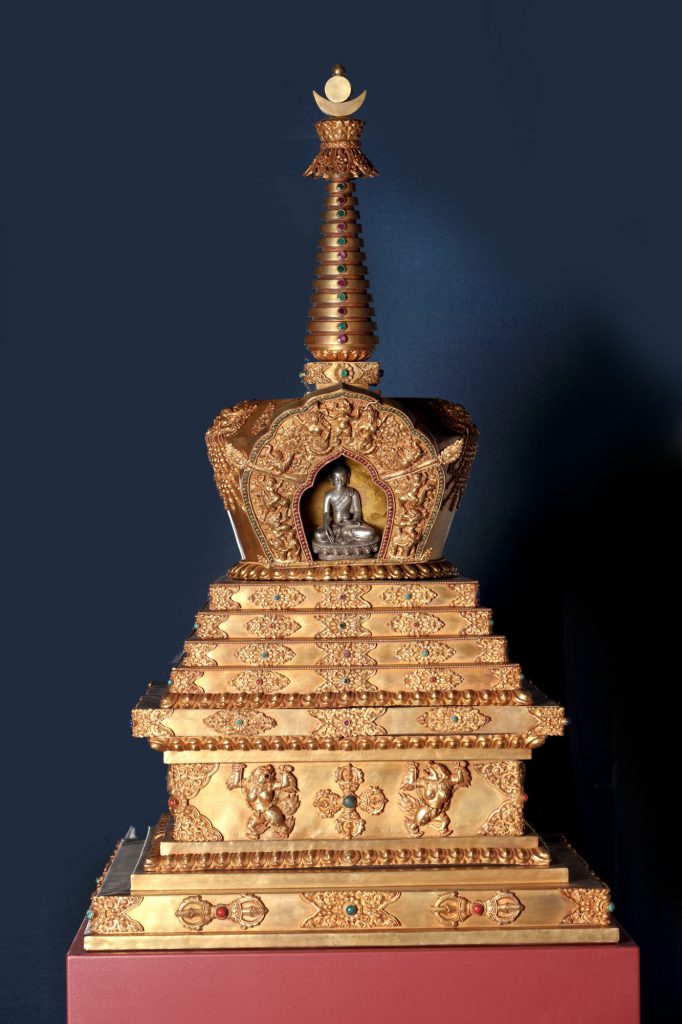 The Stupa of Enlightenment is a relic shrine made according to “perfect” proportions. Charged with positive energies it has a blissful influence on its environment and everyone who comes into contact with it.

The spiritual heritage of the Tibetans concerns the knowledge of a centuries-old tradition rooted in wisdom and compassion. This knowledge can open our eyes to other conceptions of reality. It is based on the Buddha’s understanding that consciousness is the most powerful aspect of nature which can be accessed through meditation.

Ignorance of the true nature of things is considered the cause of suffering. Buddhism offers a way out of this suffering. It is based on the idea of a reality that is beyond reason and cannot be communicated in language. This reality can only be referred to with the help of symbols.

The ‘deities’ of the Tibetan pantheon are personifications of these symbols: every detail in their design has multiple meanings. The ‘deities’ do not exist outside ourselves, but symbolize our inner strengths and qualities. They are depictions of the wisdom, power, and compassion of the enlightened consciousness that is naturally present in everyone.

In esoteric Buddhism ‘Buddha’ stands not only for the figure of the historical Siddhartha Gautama (Shâkyamuni), who since his Enlightenment was called ‘the Awakened One’ (Buddha).

It is also a synonym for an abstract cosmic principle, the absolute or ultimate reality, which as ‘Buddha-nature’ pervades and underlies all that exists.

The term ‘buddha’ – with a small letter – refers to the ‘Highest Truth’ or the Supreme Consciousness. Written with a capital letter, it refers to someone who has fully ‘awakened’ to this Supreme Consciousness or to this ‘Supreme Truth’. When this consciousness is symbolically represented in the form of an idealized Buddha figure with perfect human traits, we speak of a mythical or transcendental?Buddha. 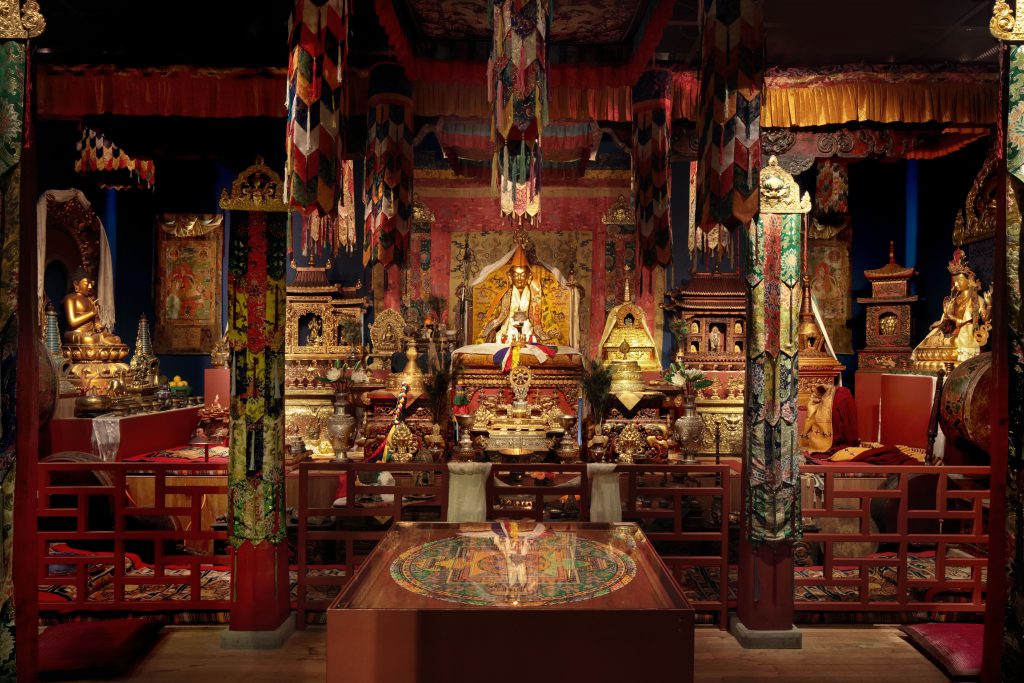 The photo shows the reconstruction of the traditional Tibetan temple that the Bodhimanda Foundation exhibited in the Wereldmuseum in Rotterdam between 2010 and 2018. The temple is an ode to spiritual education in the land of the lamas. The sparkle of the colourful, exuberant interior is an eternal illusion, but at the same time expresses a higher reality.

The most beautiful and precious to which we are attached is dedicated here as a sacrifice to the spiritual world. In this way it is a symbol of detachment. Precious metals such as gold and silver and semi-precious stones such as turquoise, lapis lazuli and rock crystal, increase the brilliance of the symbols in the temple space and emphasise the precious and exalted character of their spiritual qualities.

The lavishly decorated interior pieces are deliberately chosen, even though they seem to contrast sharply with the simplicity and sobriety of Buddha’s teachings. They have therefore been deliberately chosen for this sacred space. When furnishing a temple hall, the Tibetans strive for symbolic grandeur. A temple is the earthly reflection of a supramundane reality, the projection of the intangible light of another reality into the inanimate matter of this world.

In a Tibetan temple, the seat on the throne occupies a prominent place. It symbolises the exalted function of the Buddhist teaching and is considered the imaginary centre of the universe, the axis mundi. This elevated throne serves as a seat for an important spiritual master, who has access to an immeasurable reservoir of knowledge and enlightened energy. Such a master is seen as the embodiment of insight and compassion. He forms the heart of a mystical force field that is visualised as a gigantic, global mandala.

On the majestic throne sits a life-size portrait sculpture representing Kelsang Gyatso, the seventh Dalai Lama. In his hands he holds the Wheel of the Law that symbolises a just government, and with it his secular power. The life of the seventh Dalai Lama, which took place in the eighteenth century, was mainly devoted to higher Buddhist studies and meditations.

In his teaching he pointed out that our consciousness is an eternal traveller and that the moment will soon come when death will separate us from our bodies and from this temporary world and we will enter a new, unknown dimension. One of his prayers said:

“To the other side of the world, all alone, immeasurably far away from the people and things I know, that’s where I go.
Here, in this life, I am always assisted and there is a hand extended to me at every moment,
but between death and rebirth, there is no one who knows me.
That is why I take such good care of it,
to live now as if I were already in that ‘in-between state.’” 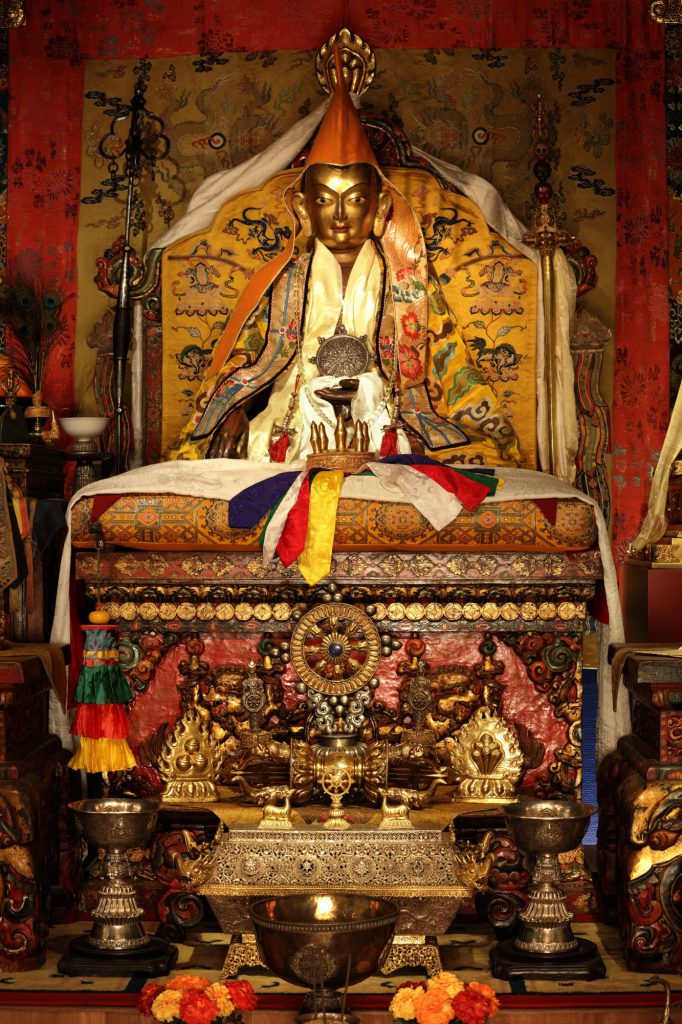 Wheel of the Law

This is the Wheel of the Law, an auspicious symbol that represents Buddha’s teaching. The Wheel shown here probably belonged to a series of ‘Seven Precious Jewels of the Universal Monarch’ used at the imperial court in China in sacrificial and consecration ceremonies. The swift motion represented by the wheel evokes the idea of the rapid spiritual transformation made possible by the Buddha’s teaching.

Inset into the hub are three interlocked jewels which represent the invisible swirls of joy that flow from the formless and omnipresent pure mind. They also symbolise the ‘Three Jewels’ of Buddhism: the Buddha, the dharma (the truth expounded by him) and the sangha (the community of those who practice his teaching). They also symbolise the victory over desire, aversion and ignorance. The hub likewise stands for ethical discipline, which concentrates and stabilizes the mind. The eight spokes represent the Noble Eightfold Path leading to enlightenment. The rim symbolises the meditative concentration that underpins the adept’s practice and facilitates the movement of the wheel. 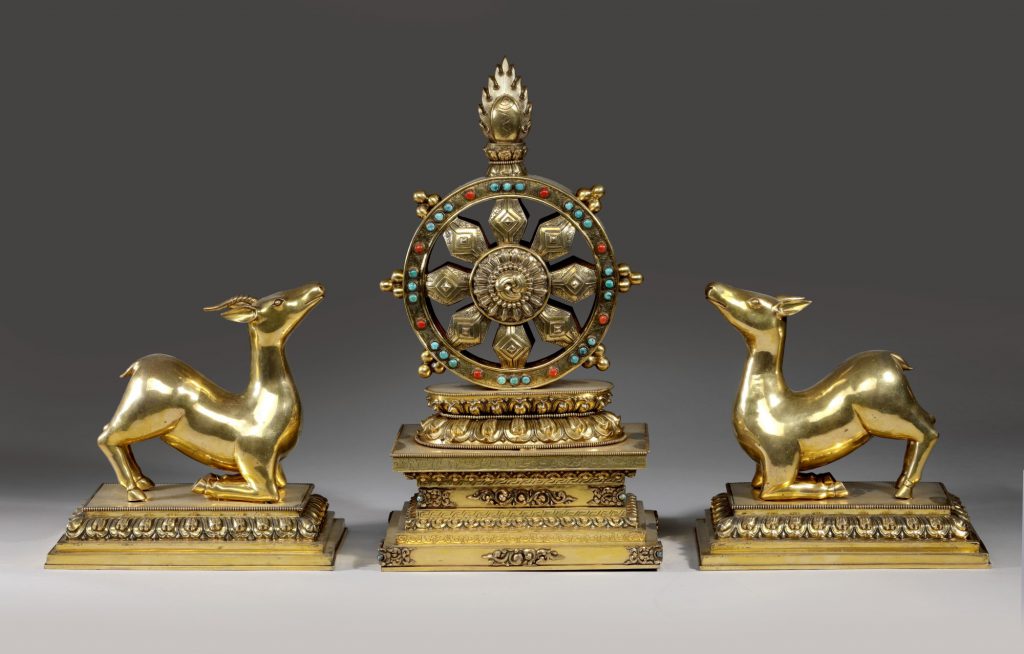 The Wheel of the Law is flanked by gazelles, in memory of the fact that Buddha’s first teaching took place in the Deer Park near Sarnath (present-day Varanasi), in northern India. 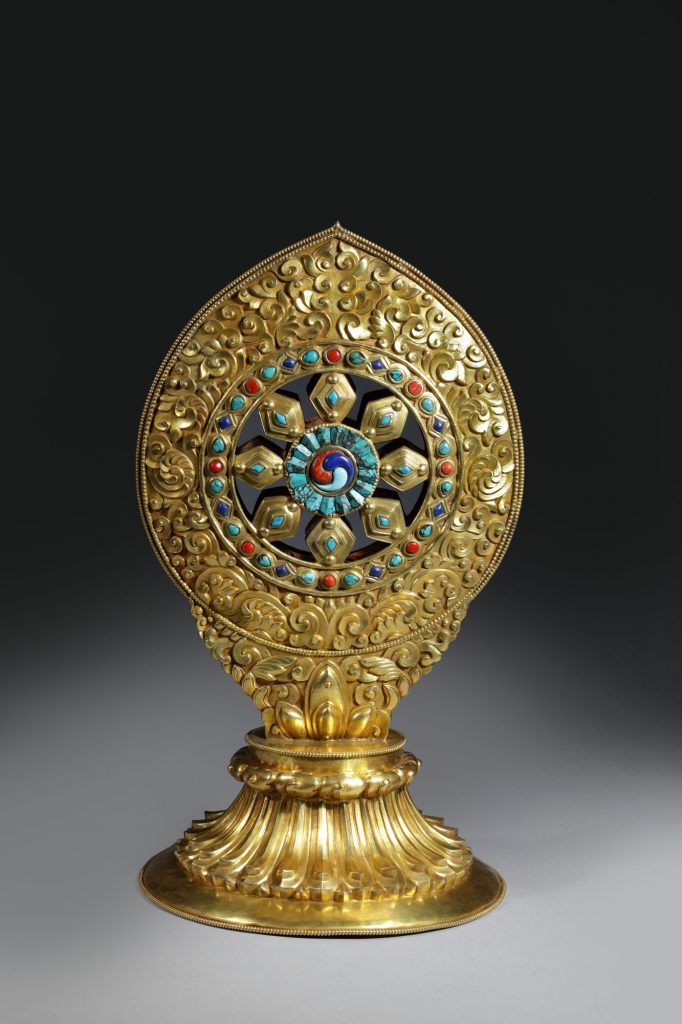 Sacrifice of the stimuli of the five senses

This bowl of rock crystal is filled with pearls. On top lies the Sacrifice of the stimuli of the five senses. It consists of a bowl with a mirror for the eyesight, an incense shell for the sense of smell, cymbals for the hearing, fruits for the sense of taste and a scarf for the sense of touch. The sacrifice symbolizes letting go of the deception that comes from the sensory perception.

The senses come into contact with the outside world. This contact evokes sensations that are pleasant, unpleasant or neutral and can cause desire or antipathy. The five senses are therefore seen as the gates through which deception or distortion of reality enters our lives and through which this deception unfolds. The identification with our physical existence leads us to pamper ourselves. In this way we experience the limited happiness of the mortal, but we also become attached to a gratification of our senses.

The deepest secrets of life lie beyond the range of vision of sensory and intellectual perception. By no longer directing our attention outwardly, but leaving the five forms of sensory awareness behind us or ‘sacrificing’ them, a change of perspective becomes possible. In this way a reversal is created in the deepest of our consciousness and we can penetrate to the essence of the mind. 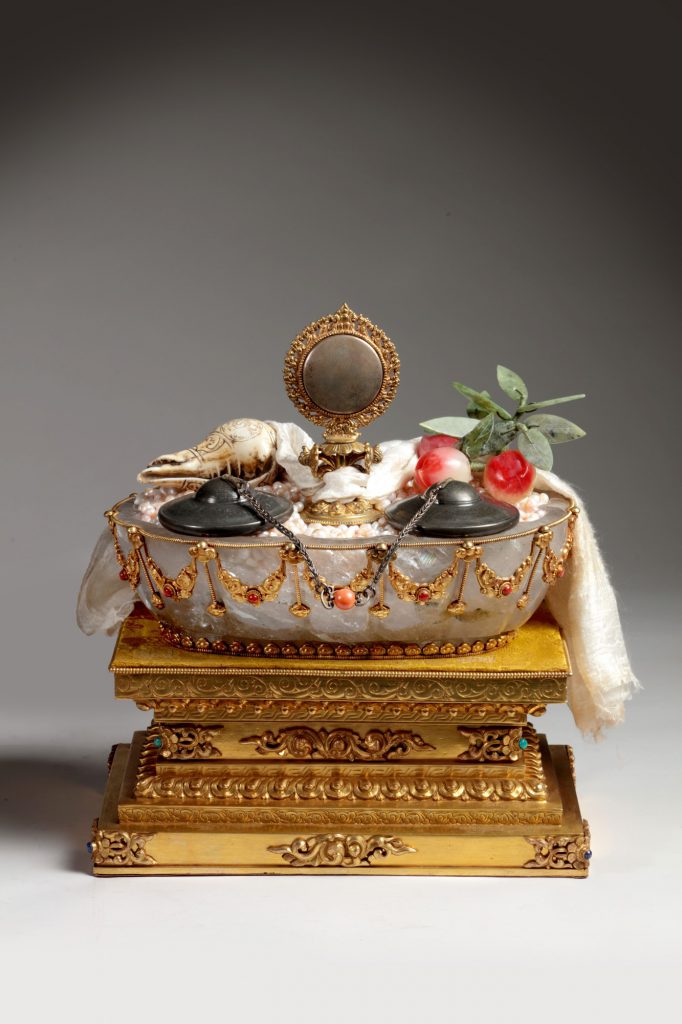 The Dalai Lama – known in the West as the ‘Ocean of Wisdom’ – occupies a very special place in the hearts of Tibetans. He is regarded worldwide as one of the greatest thinkers and spiritual leaders of our time. His peaceful attitude to life and disarming frankness make him unprecedentedly popular. Kindness is his credo and the core of his message is that by practicing our mind, we can undergo a liberating transformation that leads to inner peace and happiness.

To the left of the throne, the impressive Potala Palace adorns the peaceful landscape. This palace, which was the winter residence of the Dalai Lama until 1959, is an architectural pearl in the heart of Tibet and the most famous symbol of Tibetan culture. It has more than a thousand rooms with about ten thousand temples and chapels, which together contain more than two hundred thousand paintings and sculptures. All these artistic representations refer to a higher reality that transcends human understanding.

To the right of the throne the Samyê Monastery is depicted, which was consecrated in the eight century by the Indian master Padmasambhava as the first monastery in Tibet. Samyê once owned one of the most important libraries in Asia. Rare books and manuscripts contained centuries-old knowledge about the secrets of consciousness. 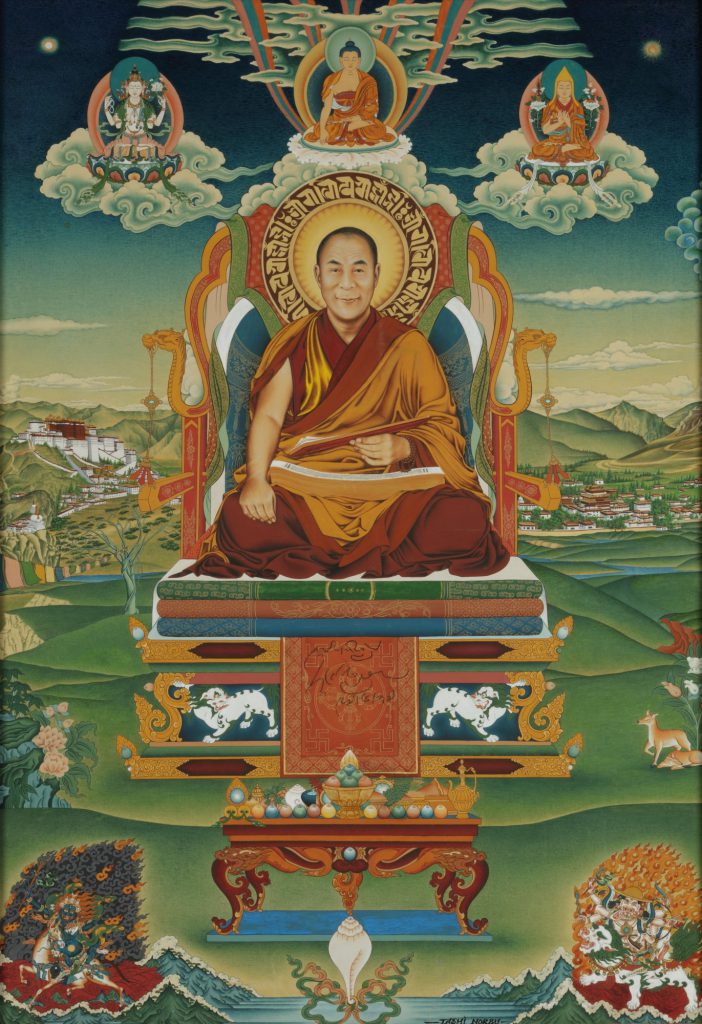 On May 10, 2014, His Holiness the Dalai Lama visited the Tibetan temple in the Wereldmuseum. This took place on the invitation of the Bodhimanda Foundation.

The temple is dedicated to the Dalai Lama as a tulku, the earthly incarnation of Avalokiteshvara, the Bodhisattva of the Great Compassion. This does not mean that a divine being, a Buddha or a Bodhisattva has descended from higher spheres and assumed a human form, but rather that in him a mystical power or an ideal has been realised in such a way that he has become the living embodiment of it. His Holiness blessed the temple and then gave it the auspicious name: Chökhor Ling, ‘Island of the Wheel of the Law’.

Touched by the lofty character of the temple layout, His Holiness promised to donate a thangka (scroll painting) on the subject of the construction of Samye Monastery, which played an important role in the introduction of Buddhism in Tibet. The choice of a thangka over Samye Monastery underlines his appreciation for this unique sacred space. The thangka is an exceptional appreciation of the Bodhimanda Foundation’s mission to present knowledge about tantric Buddhism and its art in the West. 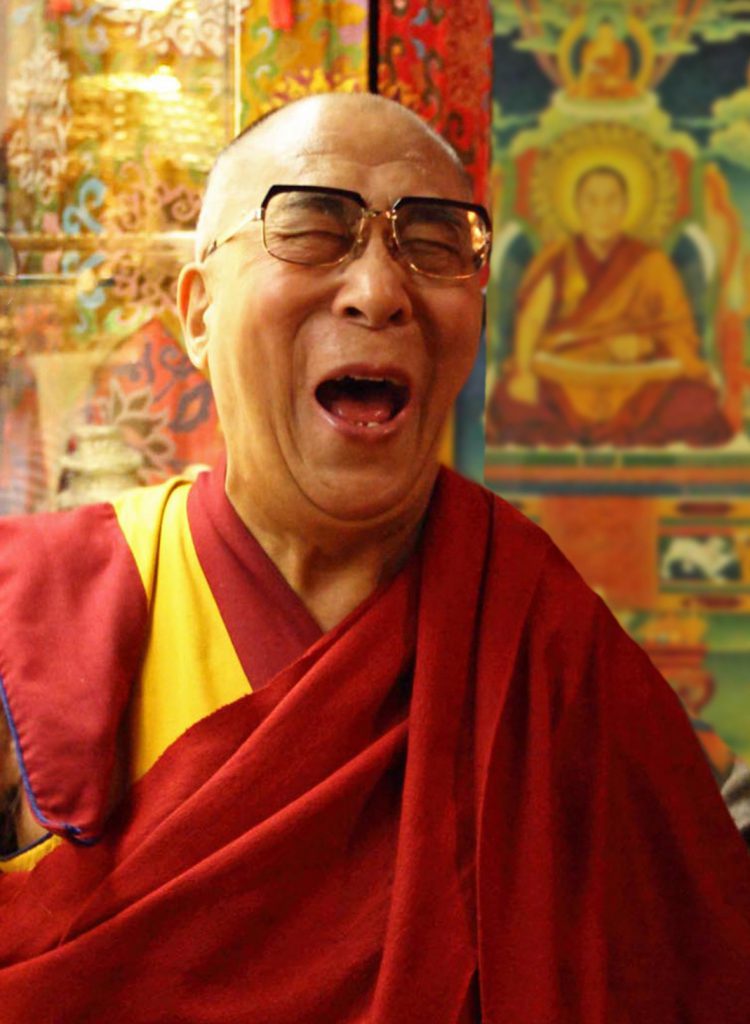 Thangka donated by the Dalai Lama

The central figure is the Indian abbot Shantarakshita who was invited by King Trisong Detsen in the 8th century to build Samye, the first monastery of Tibet. Inspired by the Odantapuri Monastery in Bihar, India, Shantarakshita designed the complex as a giant three-dimensional mandala, a reflection of the cosmos including Mount Meru as ‘world axis’ and around it as satellite islands the vast world continents.

The story goes that dark powers brought down the newly erected walls of the monastery every night. Thanks to the help of the Indian guru Padmasambhava, who with his magical powers subdued the local demons, the construction could be completed. Because this story is linked to the origins of Tibetan Buddhism, Padmasambhava (left) and King Trisong Detsen (right) are depicted at the bottom.

A master painter from the Norbulingka Institute? in Dharamsala (India) made the painting on the instructions of the Dalai Lama. It is mounted within a frame of brocade and silk. On the front is the signature of the Dalai Lama. 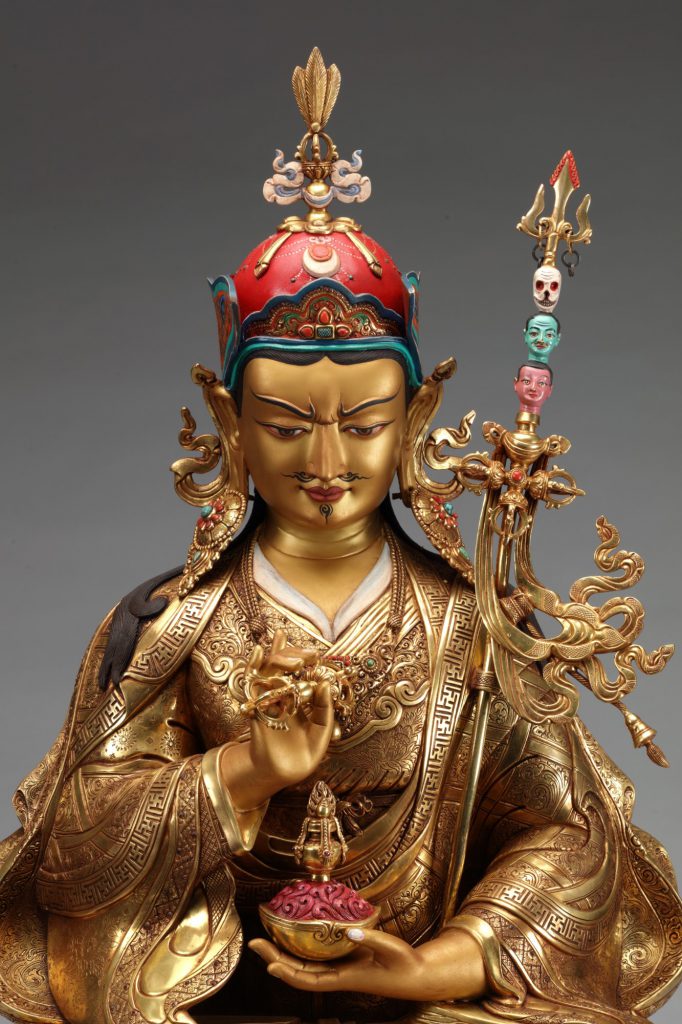 The Indian master Padmasambhava (‘the Lotus-born’) is one of the historical founders of Tibetan Buddhism. The magical staff symbolizes his ability to transform the world of suffering into the paradisal world of an enlightened being. 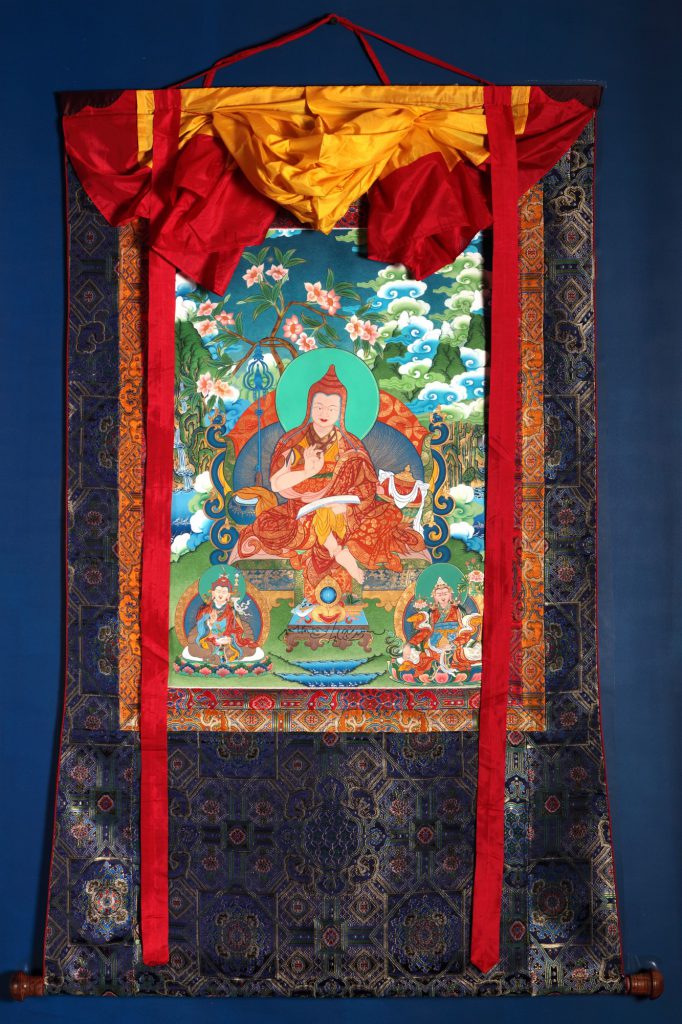