The Bodhimandha Foundation offers you a brief and fundamental explanation of tantric or esoteric Buddhism in Japan. Next you will get an explanation about the adornment of a Shingon temple with attention to some of the most important ritual objects, such as the mandalas and the vajra sceptres. Finally, you will learn more about the most important founders of Japanese esoteric Buddhism. 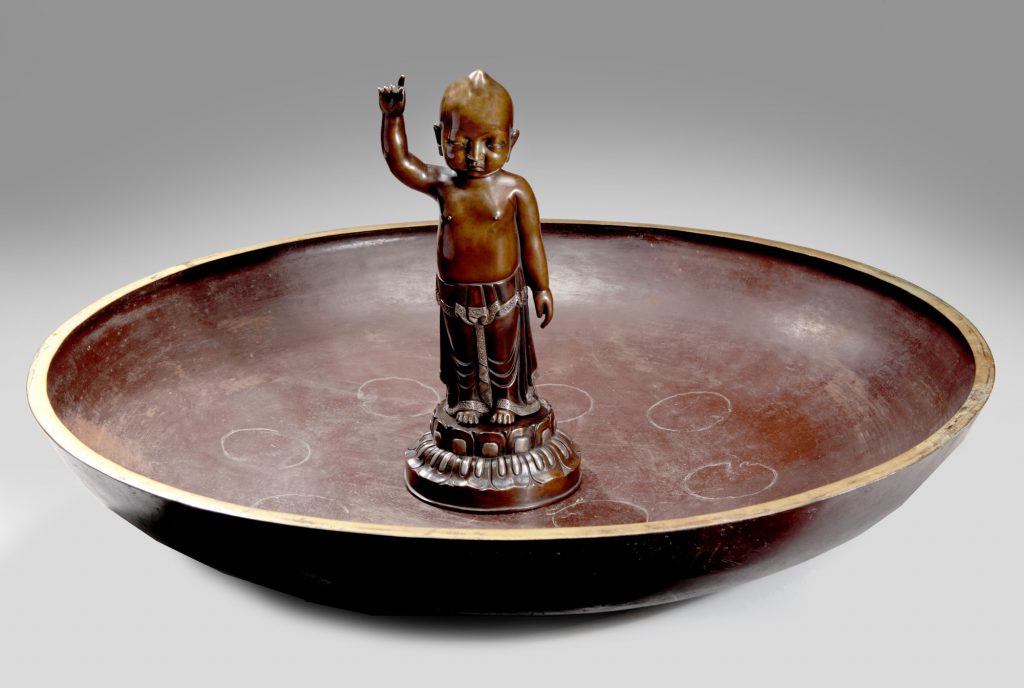 Buddha as a newborn and connection between
heaven and earth.

In the fifth century B.C., in Lumbini Park (now Rummindai in Nepal), a child was born who, in later life, would occupy such an important place in the spiritual history of mankind that his birth was surrounded by all kinds of miracle stories. According to legend, the infant stood up, and as the earth shook and trembled and the whole world was illuminated, he took seven steps and declared – in a world where everyone believed in reincarnation – that this would be his last birth. At the age of 35, thanks to a spirit trained by yoga exercises, he reached the state of complete enlightenment. After this personal transformation, which Buddhists regard as the greatest and most decisive event in the evolution of mankind, he was called the Buddha, the ‘Awakened One’.

The World of Enlightenment

Japanese tantric or esoteric Buddhism is based on effective methods for obtaining extraordinary powers and spiritual enlightenment. The Japanese call it mikkyô, ‘the secret teaching’, for its essence is beyond the reach of the intellect and can only be accessed through mystical experience. Precisely because the absolute? cannot be approached in a rational way, it is realised through symbolic actions, through rituals in which the cosmic order is ‘recreated’ and the finite individual transforms into an infinite body of consciousness.

The world of suffering, sustained by the energy of ignorance and revolving around the self-centered individual, transforms into the radiant World of Enlightenment. This heavenly world is a state of pure consciousness, which manifests itself as transcendental wisdom? and universal love and in which the self and the other are ultimately inseparable. Through this transformation man experiences the deep unity of all things and becomes himself a Buddha, an ‘Awakened One’.

The secret teachings were introduced in Japan in the ninth century from China by the monks Saichô and Kûkai, each of whom founded his own school. In the seventh century, under the leadership of En no Gyôja, Japanese mountain ascetics developed the Shugendô tradition, a mixture of indigenous Shintoism and exotic Buddhism.

Rising from an open lotus and silhouetted by a full moon appears the mystical sound symbol ‘Vam’. A canopy emphasizes the exaltation. The whole is carried by a vajra sceptre. ‘Vam’ is a sacred syllable or ‘seed sound’ with great creative power. It can lead to complete inner awakening.
Kamakura period (1192-1333). 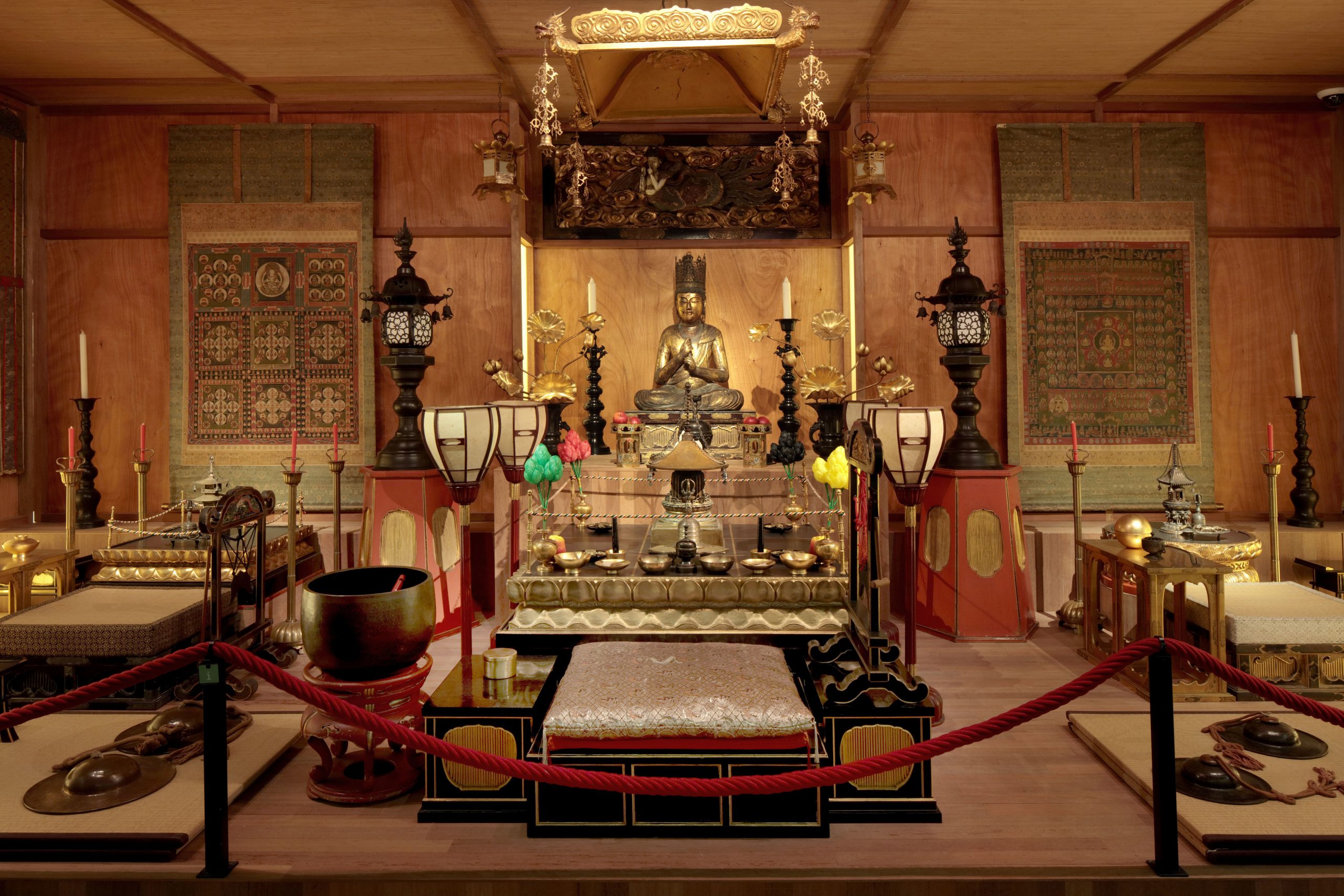 The photo shows the reconstruction of the main hall of a Shingon temple that the Bodhimanda Foundation exhibited at the World Museum in Rotterdam between 2010 and 2018. The main hall visualises the secret setting of the mystical training?. In this way it offers a rare glimpse into a sacred space forbidden to lay people.

In the middle sits the supreme Buddha of esoteric Buddhism, the mythical sun Buddha Dainichi Nyorai, the Great Enlightener, whose light reaches all corners of the universe like a Great Sun. He symbolises pure, universal consciousness,the wisdom of the ultimate reality?. All the divine forms of the Buddhist pantheon originate from his immense energy. His mystical hand posture expresses the unity of the relative with the Absolute, or of the mortal individual with the cosmic, universal consciousness.

Scroll paintings of the most important mandalas of esoteric Buddhism flank the sun Buddha: the Diamond World Mandala and the Matrix World Mandala. These mandalas express the secrets of absolute and relative reality in a symbolic language that is only accessible to the initiated. The ‘female’ mandala of the Matrix world (right) contains the secret of matter at rest and that of the ‘male’ Diamond world (left) the secret of energy in movement, of ‘wisdom in action’.

In front of the Buddha stands the main altar, a three-dimensional mandala formed by a platform on which ritual objects are arranged. Its centre is occupied by a pagoda shaped relic holder.

In the four corners of the mandala platform magical ‘daggers’ have been inserted between which a five-coloured ‘diamond thread’ has been stretched to elevate the demarcated space into sacred territory and keep the mandala pure. The artificial flowers in the treasure vases on the mandala platform symbolise the five forms of mystical wisdom that represent the totality of enlightened consciousness.

In the foreground is the seat of the ajari, the priest who is initiated into the secrets of the mandalas and is allowed to perform the rites associated with them. Furthermore, in this temple arrangement there are two smaller, three-dimensional mandalas with associated ritual objects, tables for sacred writings, ritual musical instruments and temple lanterns.

These two other specimens of the mandalas, are painted with mineral paints and decorated with carved gold leaf. They represent, in an extremely complex symbolic language, profound concepts of consciousness developed by Buddhist masters, based on meticulous observation of the mind ‘from inside out’.

The mandalas are two-dimensional representations of the universe that map out the deepest secrets of consciousness. Both mandalas also depict vajras, short sceptres that are usually used in a three-dimensional form during the performance of rituals (see below).

The Matrix or Womb World Mandala is a graphic representation of the universe that maps the multidimensionality of consciousness and symbolizes both the microcosm of the inner world and the macrocosm of the outer world.

In the centre of the mandala there is an eight-bladed lotus with in its heart the passive, spiritual mother-womb element? of the sun Buddha Dainichi Nyorai, the Buddha who embodies the wisdom of the ultimate reality. The eight petals of the lotus symbolise the eight forms of consciousness that we must transcend in order to free ourselves from the attachment to illusions: the first five correspond to the five senses; the sixth is ‘mind’, mental awareness; the seventh is self-awareness, the ego-sense; and the eighth is the ‘receptacle’ or ‘store-consciousness’?. It is this ‘store-consciousness’ in which everything that was once experienced is kept as ‘karmically charged’ seeds? and from which mental and physical elements develop, making us the creator of our own reality.

As a graphic representation, the Matrix mandala consists of twelve sections or courts in which a total of 414 Buddhas, Bodhisattvas and other mythical figures give expression to reality in the phenomenal world.

Making a pair with the Matrix-mandala, the Diamond World Mandala represents the universe as it is perceived by a Buddha, a fully enlightened one or awakened one.

The Diamond World Mandala is a graphic representation of the highest ‘wisdom’ of absolute reality, with the active, material diamond element of the sun Buddha Dainichi Nyorai? in the centre.

The mandala is made up of nine courts containing 1,461 Buddhas, Bodhisattvas and other mythical figures. Each court is a mandala in itself, with the sun Buddha Dainichi Nyorai at the core as the embodiment of the Absolute. Adepts of the higher tantric meditations make a mental passage through these nine courts, in order to attain the knowledge revealed in them and to allow their minds to ‘return’ to their original condition of purity.

The short vajra scepter, as also visible in the mandalas above, is the most important cult object of esoteric Buddhism. The word ‘vajra’, meaning ‘diamond’ or ‘adamantine’, alludes to a supernatural substance, hard as a diamond, clear as the void, irresistible as a thunderbolt.

In Shingon Buddhism, vajras symbolize infallible, all-pervading insight; the indestructible truth that cuts through every obstacle on the path to enlightenment with the hardness of a diamond.

The five-pointed vajra symbolizes the five elements: Earth, Water, Fire, Air and Ether or Emptiness; the five archetypal peaceful Buddhas. This vajra may only be used by priests who have received higher ordinations. 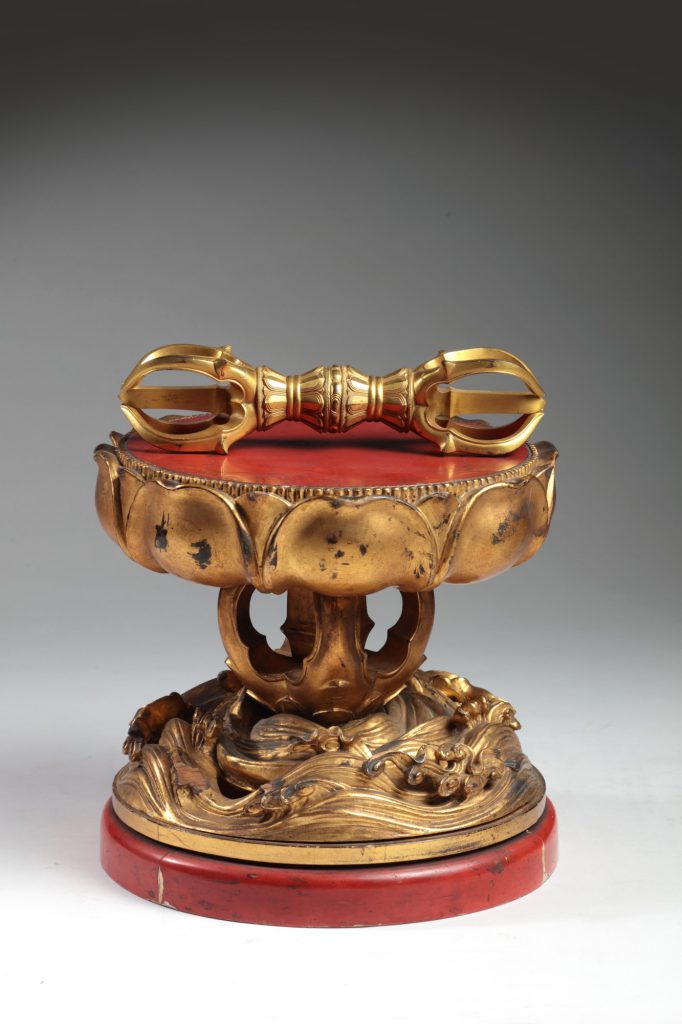 This kongôban is a triangular lobed carrier tray on feet on which a ritual handbell stands, surrounded by three different vajra sceptres. The bell symbolizes the world of phenomena. Its sound is the symbol of transience. It is wordless, imageless, formless and without any substance; it appears and disappears. According to Buddhist teaching, things, like sound, do not possess any substantial reality. The bell is ‘feminine’, but with the ‘masculine’ handle in the form of a vajra it symbolises the inseparable connection of the Matrix and Diamond world patterns (see the explanation of the mandalas).

Founders of esoteric Buddhism in Japan

The monks Saichô and Kûkai and the ascetic En no Gyôja are the founders of three major movements in esoteric Buddhism in Japan.

On the scroll painting we see Saichô, the founder of the Tendai school. Saichô (767-822) sits on his seat, immersed in meditation. By repeating the colour of the background in Saichô’s robe, the painter shows that he is one with his surroundings.

Saichô studied in China various Buddhist movements, including that of the tantric ‘School of Secrets’. He based his teachings mainly on the Lotus Sutra. This scripture, the contents of which are attributed to the Buddha himself, contains profound reflections onthe Buddha nature? and on the ability of all conscious beings to awaken and become Buddha themselves.

Saichô founded his monastery on Mount Hiei, where he taught two complementary methods to achieve samâdhi or perfect unity of mind: peace of mind through ‘staying silent’ (shamatha) and ‘insight’ (vipashyana).

The tantric master Kûkai (774-835) has two fixed hand attributes: the vajra scepter and a rosary for mantra recitation. Kukai was born in the year 774 and was one of Japan’s most versatile geniuses.

Guided by a prophetic dream, he found a copy of the Sûtra of the Great Enlightener, an esoteric scripture emphasizing the possibility of enlightenment in this life. Because no one could explain the text, Kûkai set sail for China to find a master. There he was initiated into the secrets of esoteric Buddhism, which are hidden in the painted mandala scenes.

After he returned to Japan, he founded the Shingon school. He died in 835 on the mountain on which he built his main temple. After his death the emperor gave him the title Kôbô Daishi: ‘Great Master of the Propagation of Truth’.

The scroll painting depicts Kôbo Daishi with his inseparable vajra sceptre and rosary for mantra-recitation. Next to his seat is a ritual water bottle, which was used during the reading of the holy writings for rinsing the mouth after making slips of the tongue.

En no Gyôja or ‘En the Ascetic‘ (634-701) was the founder of shugendô, a syncretic? form of Buddhism and Shintoism practiced by yamabushi, ascetics who live secluded in the mountains, at one with nature.

According to tradition, he became one with the forces of nature and developed paranormal abilities. More than a thousand years after his death he was canonised by the emperor Kokaku and posthumously elevated to the rank of bodhisattva.

The sculptor of this figure has portrayed him as an old man, with a staff in one hand and a sacred text in the other. The jingling sound of the metal rings gives a timely warning to snakes and other creatures to clear the path, to avoid being accidentally trodden on. He wears takageta, high-soled wooden sandals that allow mountain ascetics to minimize contact with the ground and keep their feet as free from dirt as possible on muddy mountain paths.